The applications will be available on JANUARY 25th, 2022, with a deadline for submission of February 10th, 2022 at 11:59PM (CST). Scholarships will be announced during Colombian Night on Saturday, March 26th, 2022, at Meacham Auditorium at the Oklahoma Memorial Union.

To be eligible for the scholarship, you must be (1) a current degree-seeking student at the University of Oklahoma in good standing, (2) in need of financial support, (3) a current member of COLSA, (4) undergraduate or graduate student. COUAA scholarships cannot be granted to exchange students or CESL students. Please check out our online scholarship application by following the "Apply" link on the top of the page.

COUAA was established in 2007 and until March 2021 it has already provided 175 scholarships to deserving students for a total amount of $196,000 dollars. This thanks to the generosity of Colombian Alumnus from the University of Oklahoma, OU professors, staff and other supporters of education in general.

Since May 2013, and thanks to the seed money and generosity of Juan Sebastian Galindo, COLSA President (2012-2013), and Yoana Walschap, COUAA could start an endowment for these scholarships to assure a lasting impact in the education of COLSA members during their years at this great university. To donate to the COUAA Endow Scholarship Fund, we invite you to follow the instructions provided in the "Donations" section. 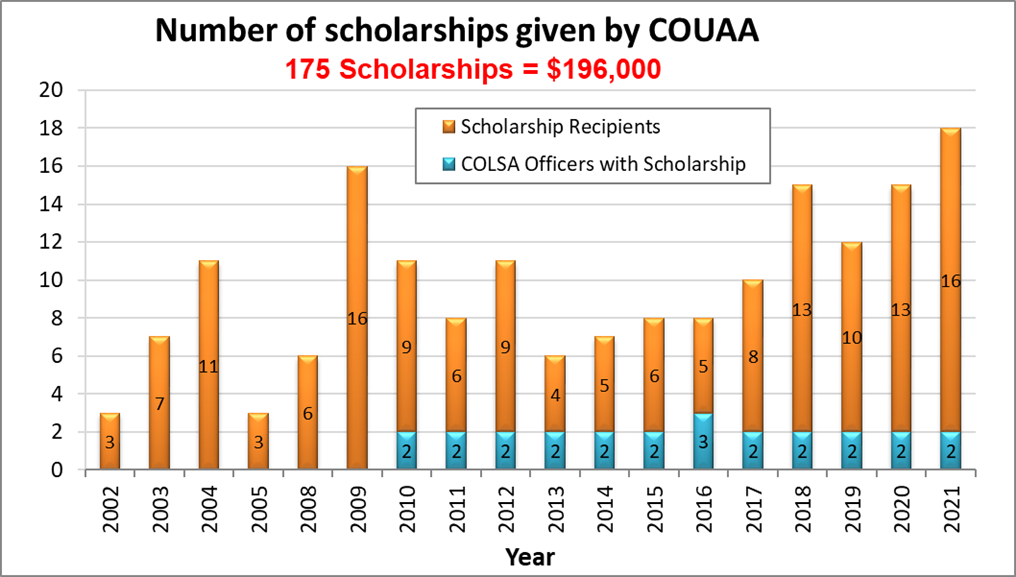 Want to say hello? Want to know more about us? Give us a call or drop us an email and we will get back to you as soon as we can.